His Big Plans For Me


So who is this father of mine?  I have only alluded to his importance and impact upon me and my family.  He plays a crucial part in this journey of mine, so I must paint a picture of him for one to understand the depths of his role.

This is my family.  Mostly right brained individuals.  Artists.  Free spirited.  And then there is me.  “A balance between the two,” my dad would always say.  “Now that’s why I can relate to you so well.  You have enough left brain in there to make sense.  You and I, Janna, we make sense.”  He would say as he tapped his finger to his left temple.  “Janna, you and I are the only ones in this family that think with the left sides of our brains,” he would say proudly.  “What does that mean, Dad?”  “It means something good,” he’d say as he pointed his finger to his temple as if telling me that he and I were both “with it” and that the rest of my family well, didn’t display the “it” he was referring to.

“Okay,” I said, having no idea what he was talking about.

But he knew we were similar.  It was so very clear to him.

In me, he saw the girl version of himself...

Born with an ability to sell.

And I sold anything, whatever I could get my hands on.

Lemonade.  Candy Bars.  Cookbooks.  Blow Pops.  I was in high school when I opened my candy business, “People, if I am carrying this over-the-shoulder-purse-bag, it means that I am open for business.  Give me your quarter, take your Blow Pop, and don’t tell any teachers where you have received your merchandise.  Now turn around slowly and walk away nonchalantly.  That’s right.”

Sometimes I even had other items in stock, depending on the time of year.  “Janna, is this your Halloween candy?”

I remember walking home from my friend’s house and there, sitting atop a pile of trash was a box of Budweiser nail clippers, 25 to count.  “Score!”  My brother standing next to me stood staring.  To his eyes it was only a box of clippers, but to my eyes, money signs were dancing before me, and my adrenaline started pumping.  For the next couple of days I went door to door selling those clippers, “You need this pair of clippers.  Your nails will look nicer, more trim.”  And when I was done, I pocketed $25.  Yeah.  You think you don’t need a pair of Budweiser nail clippers?   Oh, but you do.

“That’s my daughter,” my dad smiled a beaming grin as I walked past him, pockets jingling with money.

“Someday, Janna, we will do something with this gift.”

And he knew very well where this gift could be used.  Alongside him in real estate. 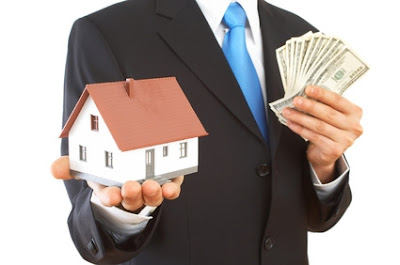 “I have 30 years of business.  How about I train you and then when I retire, you take it all over?”  Sounded good.  So I closed down my Blow Pop business, and it was off to real estate school for me.  I thought it would be fun to work with my dad.

It was always fun to be with Dad.  He could get me laughing so hard my sides would ache.  All he would have to do is start laughing and I would be hooked.  His giggle, contagious.  He would be on the phone with someone and begin laughing about something or other, as I would be walking by.  Before I knew it I was joining him, both of us bending over in stitches, a fit of hilarious tears, slapping each other's shoulders and holding our stomaches.  As he hung up the phone, “Dad, what was so funny?  What are we laughing at?”

“Oh nothing,” he said, as any leftover bit of laughter began to subside.  I was left standing there, shaking my head back and forth, baffled.  How does he pull me in every time?