Here we were 15 years later, sitting alongside Ryan and Barbie in their living room of their million dollar home.  Ryan ended up a successful entrepreneur.  It must have been my pep talk.
A beautiful home in lovely rural California in a little city right outside of San Luis Obispo.  Here it sat atop a green rolling hill with a gorgeous view of the neighboring sloping hills.  Talk about building his nest.  That guy went above and beyond.
Ryan became successful, very successful.  A small side business expanding, growing bigger until it gave birth to other successful business endeavors.
I looked out the window of their home, and there right outside their window lay his very own vineyard. 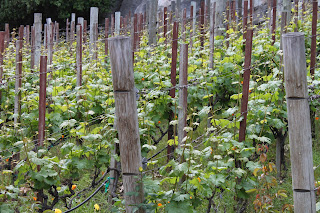 It had been Ryan’s dream, and he was living it.  Whose dream was it not?  Oh, to have land!  I looked at Dan.  I knew this was what he always wanted.  “A vineyard, Janna, let’s grow a vineyard,” I recall him saying to me when we still were in our Long Beach home.  The backyard was smaller than a two car garage.  The only place we could even plant our vineyard would be in our little dirt plot measuring 3 feet x7 feet.  “A vineyard, Dan?  Do you mean a vine?”  We would harvest two tiny grapes the size of two shriveled peas.
It was clear that Ryan had been blessed, so blessed.
“So what is it like to accomplish so much, Ryan?  This is amazing!” I inquired.
“It’s too much,” he said as he breathed a heavy breath.
“Whatever do you mean?”  I sounded like Mary Poppins.
“We lost sight of what is most important,” he said.  “This was my dream, to own land, to have a vineyard.  This romantic idea that I would have spent my whole life trying to achieve, and now that I have it, I realize I have become a slave to it.”

This was deep.  I wanted to know more.  I wanted desperately to hear the wisdom he had attained.  We all have dreams and goals, and as I have heard before, that many, once they reach these dreams, become disappointed.
“Please go on,” I was all ears.
“My businesses were being blessed, and I wanted to do something big for God in response to how grateful I was to Him.  Well, this rural area in which we live is so big on vineyards, so I decided to open a wine shop featuring local wines.  All of the profits from the shop would be dedicated to a nonprofit I wanted to start.  Water wells in Africa.  A nonprofit organization to bring clean drinking water to the people of Africa.”
And so in his pure attempt to give to others in need, he decided to start a business that could be used to give to others.
This passion and love for the hurt and dying took root in his heart ever since he was in high school and went on a trip to India.  Seeing the devastating conditions people were living in tore at his heart; Ryan’s eyes were opened to something bigger than himself.  He was only a young man at the time, but he knew, deep within his heart, he would do something to help when he could.  He felt it a calling.
And oh, it was.
However, all did not go as planned, as many times it does not.
A month before opening the wine shop, the economy crashed, leaving Ryan and his family to carry the financial weight of this wine shop plus a nonprofit, plus many other financial responsibilities.
Here was Ryan, living his goals and dreams…
that heavily weighed him down.
Dreams that hadn’t fulfilled what they silently promised.
Gold that turned out to be fool’s gold.
If happiness was not the result of dreams accomplished, then where was the source of true happiness to be found?  The kind that doesn't fade away. Photo Source
Dan and I both leaned forward on the couch, eager to hear the secrets of life’s true satisfaction revealed.....
Posted by Simple Life Journey at 8:38 PM