We looked at the concern in Lou and Anita’s eyes.
“How could you move away from what we have?” Anita asked.
I knew what we had was special.
We sat there staring back at them as they stared at us.  I felt the pressure begin to build behind my eyes.  Soon Lou and Anita became a blur through heavy, tear-filled eyes.  Why couldn’t this be easy?  There were so many memories we shared together, close to twenty years of them cemented within the pages of my mind. 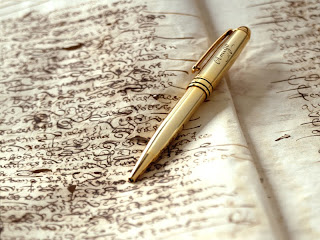 ***The time the four of us attended a wedding reception together.  No one was dancing, and so we felt it our responsibility, our obligation to get the party moving.  The four of us stepped onto the dance floor and what took place, we thought, could only happen in the movies.  The walls were covered with full length mirrors which would be the perfect backdrop because who doesn’t love to see themselves in the mirror?  We stood next to one another almost shoulder to shoulder in a line dancing before ourselves in the mirror, entranced by our own images, as a baby is by their own reflection.  We felt no inhibitions, only freedom to express ourselves through the fine art of dance.  Before we knew it, we were breaking out an impromptu synchronized dance.  Well, the mother of the bride and the mother of the groom all wanted in on the action and soon they were to join us in our shindig.  And then our moves began to catch on as other guests began to trickle onto the dance floor.  There behind us in the mirror was a crowd following our every move.  So this is what it feels like to be an aerobics teacher.  I knew I should have been one.  In high school it was my life's ambition to be an aerobics teacher.  I never did aerobics.  I just liked the idea of always have a hot body.
***Then there was the time when Anita and I decided to tell our husbands that we were both pregnant.  We decided to reveal the news at the happiest place on earth- Disneyland.  The four of us stood in line for a ride.  Our husbands were none the wiser of what was coming.  “We have to go to the bathroom,” we told them as we slipped out of the line.  Lies.  “We will meet up with you.”
We jetted over to the Snow White ride and asked two of the employees to help us out.  They would hold up our homemade “We are pregnant!” sign as we came to the end of the ride.  The perfect plan.  Our husbands would be shocked  and surprised.

And boy, were they.  Because at the end of the ride, there stood two employees, a young woman and a young man, holding a ‘We are Pregnant’ sign with two giant grins painted across their faces.
“Congratulations!” our husbands called out to them.
The employee “couple” looked at one another as their eyes grew big.  They began shaking their heads wildly.
“No, it’s you!” Both Anita and I said in unison to our husbands.
“Who?  Me?  You?  Her? or Her?  Who?”
“You! and You!” we tried to explain.  "We are due the same day!"
Their looks were more of confusion than excitement.  For the next fifteen minutes they were like, “Now who is it that is pregnant?  And how did this happen?”
“Well, it all started with a bird and a bee, which was really you and me and….”
That same homemade “We are pregnant” sign was to be saved and would be used two more times to announce our next two pregnancies. 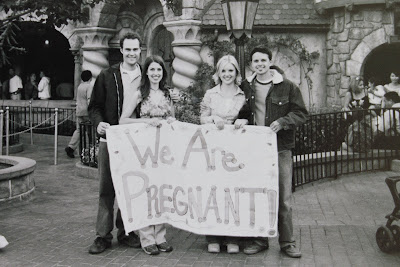 ***It was one of their darkest moments, the sudden, shocking death of Lou’s mother, Lydia.
The phone rang, interrupting our family dinner.  I picked it up, “Hello?”
“Janna,” Anita’s voice broken by sobs, “Lydia died.”
“What?!!!” my legs grew weak and began to shake.  So this is what it felt like to go into shock.  She couldn’t explain further, too overwhelmed by emotion.
“We are coming over,” she muttered. “We are on our way.”  And then the phone went silent.
My face was white when I turned around.  “Dan, Lydia died.”  Emotion flooded over me like a tsunami.    Nothing could have prepared us for this.  Lydia was fine, healthy.  There were no signs.  There were no signs!
I waited at the window.
As their car pulled up, Lou quickly walked up to our front door.  Dan was there to meet him.  They both stood in silence, and as if someone had pushed them together, they found themselves in a tight embrace, an embrace that would seem only two brothers could share.  Sobs so violent overtook them both, causing their bodies to quake.  I trembled with grief as I watched on.  Lou mourning the loss of his mother, gone too soon.
The memories seemed like distant dreams, some of them had faded into the world of forgotten, but others we would never forget.  We had experienced some of life’s most precious moments with these people.  Junior high.  High school.  College.  Births of babies.  Death of a parent.  Hundreds of meals shared over vats of laughter, the kind that makes my head click.  Numerous vacations, too many to count.

Simply living life together.
Relationships like this don’t just happen every day.
“What if God has it in His will for us to move?”  I asked them sincerely.
“But why would He?  Why would it matter where you lived?” they questioned back, ready to combat any reasons we might have for moving.
“What if God has something different for us planned?”
“Why would He?” Anita retorted.
“I don’t know!  I don’t have the answers,” I answered in frustration. 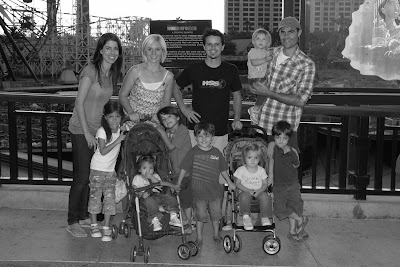 Posted by Simple Life Journey at 12:12 AM