A three day weekend quickly approached.  We were about to embark on our second adventure.  This time we were off to Northern California, a small town right outside of Sacramento.  We were going to visit my cousin and her family in her rural home.  She was one of the few who were able to get out.  Out of the city.  Out of the busy rush.  Out into the country.  Land.  Horses.  A garden.

I seldom saw her since she moved out of Southern California, so my excitement grew in anticipation for this trip.  I wanted to see her.  I had always admired this cousin of mine.  Her mother had married into our family, and POOF! instantaneous cousins, her and her sister.  They were around 8 and 10 years old when they arrived, and I could hardly withhold my excitement of suddenly receiving two girl cousins.

While growing up I envied her because she was not a family member by blood.  Meaning - she could marry our cousin Jeff, not my second cousin once removed Jeff.  No, this was my first cousin Jeff who was only a few years older than me, and he was my childhood crush (pre Hans Solo).  “Mom, why can’t you marry your cousin?  What is wrong with it?”  She never had a really good answer except that our children would be intellectually disabled.  But was that a good enough reason?  I would love our special children.  I remember spending the night at my grandma’s house in Hemet.  There sat atop the dresser a picture of my two cousins together at their high school prom.  I held it in my hands staring at them.  The picture haunted me whenever I visited my grandmother.  My cousin’s lovely blonde hair, her bangs raised ever so sturdy into a ratted poof.  What was her secret?  I lowered the picture I held in my hand and gazed into the mirror at my ratted bangs.  They couldn’t hold a candle to her perfected ones.  Mine were only a pathetic attempt. 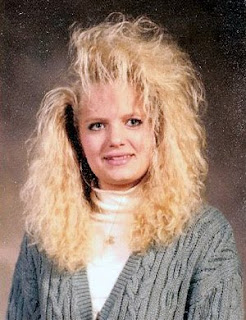 Photo Source
No, I couldn’t marry Jeff and I was jealous.

I have always admired my cousin and not just for her bangs and her blood.  She is Martha Stewart in the flesh.  She has such a classic simple style that I envy, not in a jealous way, oh no, but in a wow, she is amazing, kind of way.  Elegance comes natural to her.  It is her gift.  And so when we turned down the gravel lined pathway which lead to her house, it came as no surprise that the house that was hers was the one that the sun was shining one bright beam down upon.

A beautiful shiny coated horse trotted up carrying my cousin whose blond hair glistened in the sun’s rays.

“You’ll take what?”  He knew me well and knew what I was going to say, but to humor himself he wanted to hear me say it out loud.

“I want to ride on a shiny coated horse and have my hair glisten in the sun’s rays as I ride up wearing a sun dress and cowboy hat.”  I could see myself in my head and I looked amazing.  I had no wrinkles and really white teeth.

We pulled up to their barn and parked the car.  I looked around.  My word!  Could anything be more beautiful?  The house was hidden from the view of any of the surrounding homes.  It was nestled right into the protective shade of matured oak trees whose branches swayed back in forth in the warm breeze.

I paused before stepping out of the car.

I didn’t realize that as I stepped out of the car, I would be stepping out into another way of life.  The exposure would broaden my perspective and begin to shake what I had thought were my dreams.