How can one of the sweetest things in your life all of a sudden turn so sour?

Source
We used to be so good together.  We used to have so much fun.  We would plan girl trips and would spend hours and hours talking and laughing into the wee hours of the morning.  We made hilarious, ridiculous music videos together that would be too embarrassing to share but way too crazy funny to delete.  On one Halloween we dressed up as old ladies, wearing moo moos, stockings, wigs, and curlers while talking in Southern accents all night.  We would laugh so hard together, so hard that my head would click audibly.  “What is that sound?” Anita asked me as our roaring laughter began to subside.  “Oh my gosh, can you hear that?” I asked, shocked.  I thought the sound was only heard on the inside of my head.  And then we began laughing once again, and I began clicking.  Click.  Click.  Click.
What happened to us?
Someone whom you would do anything for becomes the last person on earth you would do something for.
It happens all of the time, if you think about it.  Another marriage down.  Another friendship has come to its end.
Why?
Can’t say for sure.  I am no expert.
“People are like porcupines,” my mom always said. “They need to learn to bend their quills so they can become close without poking one other.”
Well, we were poking each other all right.  Right to the emotional death of our friendship.
It’s kind of sad to think, really, how many relationships are lost.
Expectations not met, lack of forgiveness, selfishness, pride, lack of grace, immaturity, ect. ect.
I will love you until….
Until you do this.
Until you do that.
Until I just don’t anymore.
And then it’s time to say goodbye.

Source
“No more, God.  I have had enough,” I cried out to God in exasperation.  “Move one of us on.”
No, was his answer.
“But God, what good can come out of this?  We bring out the worst in each other.  Reconsider?” I continued my plea.
No, was his answer.
“Then what will you do with us?  With her?  With me?”
We both wanted out.  We wanted to move on to find a friend who was less drama.
Drama.
Women hate it, yet it is with us wherever we go.  Drama is like an unsightly wart on your finger.  You burn it off, you cut it off, you nibble it off when no one's looking.  Hopefully it's in a spot that your teeth can reach or then you have your husband get involved.  And just when you think it’s gone for good, Pop! there she is again, smoking a cigarette with a couple of wart babies next to her.  So you learn to accept the wart, befriend the wart, and respect the wart.  You tiptoe around it as best as you can so as to be careful not to arouse her.  But you know she is coming.  And oh, she is coming, like a crazed witch flying through the air on her broomstick with yellow teeth outlined by black coffee grits.  Drama is coming for you.
Anita ended up marrying Lou, my husband’s best friend of 12 years, and so we saw no end to this taxing, dramatic relationship of ours.  Our ties would remain forced upon us.  But God had a plan for our friendship.

Over the next few years, He would use this relationship between two selfish, self-centered girls to teach us what it meant to bend our sharp, rigid quills.   He would use us in each other’s lives to refine us, purify us, and change us into people different than who we once were.  He didn’t allow us to quit as so many people end up choosing to do.

"So we are stuck together," Anita said as she walked into my classroom during lunch break.  "Yeah, I know," I responded while taking a deep breath.

"We might as well make this work," she said.

Could God put certain people in our lives just to grow us?  Absolutely.
There came a day when I became thankful for this relationship with Anita, when I realized that God had used her in my life to become a better friend, a better person, a better wife, and a better mom.

Through all of those conflicts we had, He taught two young women so much about themselves, about each other, about life, and about what selflessness really is.  During the upcoming years we would experience tons of tears, discussions, and eventually tons of laughter again.  Our friendship, in the end, was restored.
But it wasn’t the same friendship;
it was stronger,
deeper,
and a lot less selfish.
Anita was not just a friend anymore, she was a friend who had become closer than any sister I could have ever had.  I always wanted a sister, always yearned and wished for one.  When God doesn’t give you something, it’s because He has something better in mind.
And He did.

Sad to think,
I almost let it go. 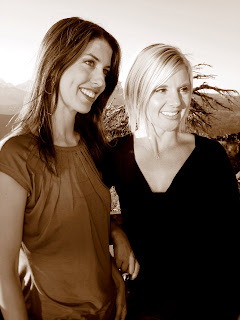