Anita and I were about ready to throw down.


With Anita and Lou’s new-found love, our relationship began to shift, taking new form.  You know how it goes when your friend finds love; they are suddenly not as available anymore.  Emotionally they are high as a kite flown simply by love.  Love is all that they can think about, talk about, and sing about. 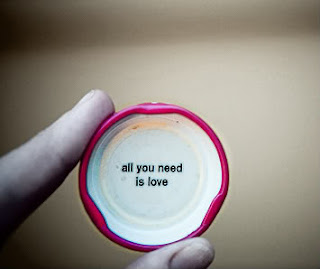 Your friend is just plain different.  You see, Dan and I had past this honeymoon stage of our relationship many years before them, after all, we dated for five and a half years before getting married.  But Anita and Lou were new and with their newness came mushy gushy love that made me want to barf all over them.
At this time, Anita and I enrolled into the same credential teaching program.  We were daily carpooling to our classes, and we were assigned to the same school for our student teaching.  We saw each other before school, in school, at school, after school, at home, at play, EVERYWHERE!
Have you ever spent an immense amount of time with a certain person?  It's like eating the same thing for lunch every single day.  It's like the cold bean and cheese burrito I had to eat for lunch all four years of high school.  Have you ever eaten a cold bean and cheese burrito?  Did you know that when you microwave something in the morning, it isn’t still warm by the afternoon?  I couldn’t even look inside my lunch bag for fear I would see it, touch it, or smell it.  That is how I felt about her; that is how she felt about me.  Now don't get me wrong, we still liked each other, a little, but we were tired of each other, allowing every little annoying thing to squeeze the life right out of our friendship.  We began to fight like two squabbling sisters.  At first it was about little things.  She wanted the air conditioner on constantly.  I wanted my window rolled down.  “Do you have to have your window down?” she asked me.  “Do you have to have the air conditioner on all of the time?” I retaliated.  She wanted to talk at 7 a.m. in the morning.  “So what did you do last night?” she asked.  I needed to be quiet at this time because I was still partly asleep.  “Shhh,” I put my finger up to her lips to silence her.

One Saturday morning a group of us girls decided to make breakfast together.  We chose to make omelets, and I was the one in charge of making them.  As I was cooking one, Anita came up behind me and said, “That’s not how you make omelets.”

I answered back, “I have always made them this way.”
“Well, that’s not how you do it,” she replied.
She continued to inform me of the “proper way” to make an omelet.  (Like there is a proper way.)  In all truth, it is a logistic that I don’t really care about.  It’s like asking me if I would like to learn the proper way of folding a bed sheet.  No!  I don’t care.  Crumpling it into a ball and stuffing it into the linen closet has always worked for me.  Whenever I open the linen cabinet door, a ball of sheets falls right into my arms, and there, half of my job is done.  Timesaving technique.  Well, I also have a time saving technique to make an omelet.  I throw in the ingredients, and my hand does wild, spasmatic movements, flipping, spinning, wacking and splatting until my final product looks like this: 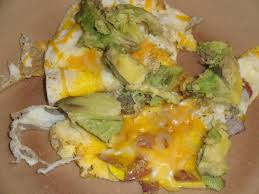 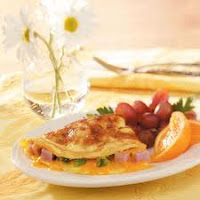 Source
Truthfully, they taste the same when they hit your mouth.
My back was toward Anita, and I was facing our friend Lisa.  As Anita proceeded to inform me how to make an omelet, I began silently opening and shutting my lips, while bobbing my head side to side like a bobblehead doll, mimicking her in a sarcastic manner.  Only Lisa can see me, I thought to myself since Anita was behind me, but I was wearing my hair in a ponytail, and I was about to find out I was clearly not hidden from view as well as I thought.

All of a sudden, she grabbed me by my pony tail and jumped onto it like quasimodo; she was ringing my head like a church bell.  Oh, you want to go there, do you, I thought in my head.  Retaliation was certain.  I would not be bullied nor bald.  I had only one chance, and I needed to make it count.  I swung my arm around and did a little Chuck Noris on her, hitting her upside the head.  “Hi ya!  Take that!” I shouted out, then laughed an evil laugh, and turned back to my omelet.  We were two girls gone wild.  She was shocked.  Yeah, of course.  My moves were amazing.  She ran out the door and slammed it behind her.  Later she said she couldn’t hear out of her ear.  What lies.
Everyone was quiet, frozen stiff.  Probably out of fear.  Would there be more kung fu?  Then I broke the silence, “No one ever pulls my ponytail.”  I don’t know why I was saying this.  Was it to warn others?  Would I be attacking others if they did?  Was it because I felt dumb for attacking my friend with a karate chop?  I am not sure.  But please friends, don’t be scared of me.  That was the only time I have attacked a friend.  I usually just attack bad guys.
We ended up being hired by the same school district, the same school, and the same grade.  So here I was teaching my sixth grade students and there behind them, across the foyer, there she was, teaching her sixth grade class, always in my peripheral.  The only time we didn’t see each other was during sleeping hours, and even then we were haunting each other’s dream.
We were fine to go opposite ways.  We both prayed, separately, that God would take us out of each other’s lives.  Our prayers sounded pretty much the same, similar to an Italian mobster, “God, it's time for, shall we say, Anita to take a trip.  I don't want to know where she goes.  Just make her be gone.  Do we have an understanding?”
But God had something very different in mind.
Posted by Simple Life Journey at 8:31 AM