But What About the Children?


And so we sat together in their living room, Dan and I on one couch, Lou and Anita on the other couch, sitting looking at one another.  Their faces looked worried, a wrinkle above each brow, a center indention between the eyes.  We were seriously considering moving to a different state, and they were worried.
“What about the children?” Anita said.
It sounded like we were getting divorced.
“I know, Anita.  I think about them too.”
*****
The Children
Anita and I had been working together teaching.  We were coming up on five years of teaching, and we both realized our reproductive eggs were in their prime, attractive, perky, plump.  They were grapes not yet effected by the wrinkling of the sun.  We were both 28 years old.  Tick.  Tock.  Tick.  Tock.  It wasn’t quite time to worry yet, but both of us started to think about the idea of children.  One of our best friends, Lisa, got pregnant, and all of a sudden, Anita and I were very attracted to big bellies and wanted one.  “What if we could have babies all at the same time?  Wouldn’t that be so fun?” I remember dreaming it up in my head, but there is no way you could plan something like that.  Absurd to even try.
So we tried.
Within months, the census?
Impregnated.
Both of us.
Our babies were due the same day.
And we had the same doctor.
And we both ended up having cesareans four days apart.
I was being checked in and wheeled to my hospital room while she was being wheeled out of the hospital to go home.
We passed each other in the hallway.
“Good job,” I said as she wheeled past me in a wheel chair.
“Good luck,” she said as I wheeled past her on a gurney.
Then a year later, “What if we get pregnant together again and have baby number two?”
Within months, the census?
Impregnated.
Both of us again.
And we were due…..
the same day.
They were born one hour apart.
This time we both had scheduled cesareans, and our doctor said to us, “You decide who goes first.  I don’t want to be the one to decide.”
It would be me first.
We both lay there in the hospital prep room beside one another, the nurses preparing both of us. 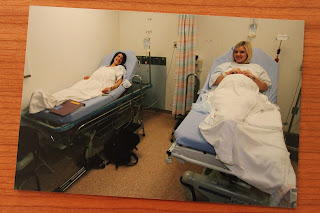 “Are you scared?” Anita asked me, looking over at me as the nurse gave her the gross potion you take before having a cesarean.
“Heck ya!!!” I said as I finished off my gross potion right before her.  “Oh, no,” I said to the nurse, “it is coming back up.  I need a…. blaaa.”
I then looked over at Anita to continue sharing my fears.  “And I am afraid I will throw up during the cesarean as well,” I said as I wiped the side of my mouth.
I continued, “I am also afraid that right after the baby is born the doctor will hold him up over my face again and that he will drip on me.  I didn’t like it when the doctor did that last time.”  The nurse began wiping my hand to prepare it to receive my IV.
“And I am scared about that really large needle that is the size of a number two pencil that they put into my back to paralyze me,” I said as I finished up expressing every fear I could think of concerning what I was just about to experience.
I looked over at her.  “Are you scared?”
Her face was pale, and her eye balls were bulged.
“Oh, you don’t look so good.  See you on the other side,” I said as I smiled and waved as they wheeled me away.

After the babies were born, we were both rolled into the same recovery room.  We both lay there, half way delusional from the medley of the painkillers we had been given.  Our husbands both sat in the room with us, laughing and talking about this crazy occurrence.  “Don’t make me laugh,” Anita warned.  “You do and we will split open,” I cautioned.  But that didn’t stop them.  Both Anita and I held our stomachs together and screamed through a fit of tears and laughter, “Stop it!  Stop it!” 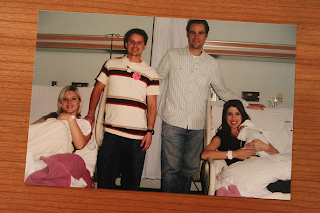 Good times.
Then a year and a half passed; could it possibly happen again?
It could. 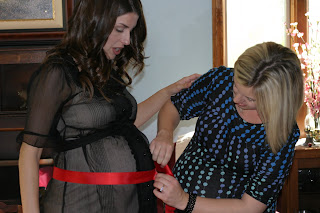 We were due a couple of days apart, so the doctor planned on delivering us the same day, but…
Anita didn’t have just one baby.
But two.
So her babies came three weeks earlier than mine.
And then we decided....

to never do it again.
Our children, her four and my three, were like cousins.  Our eldest two were like two peas in a pod, our second born were inseparable, and our youngest three girls were two and half years old, and they thought they were triplets.
How could we move away and separate the children? 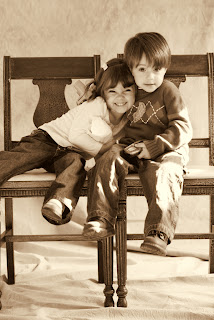 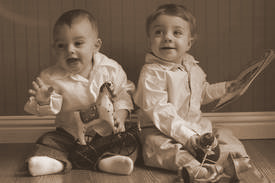 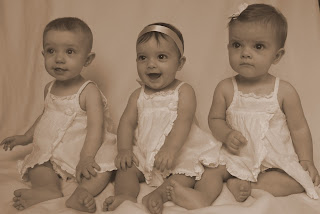