For the ten minutes I stood upon the rolling hill and decided to live atop it, it felt like the perfect idea.
And then ten minutes later, as we were riding the quad back to the house, I was like, “What the heck are we talking about?”  I don’t even want to move, and now I am thinking about moving to a green rolling hill that is very windy when you stand upon it?????  I imagined a stormy night, fierce wind blowing tree branches and other things against the house.  Scratch.  Scratch.  Gasp, what was that?  The house would be shifting, creaking, scaring the life right out of me.

But there is family here in this place, family that still spends holidays together, I reminded myself.  My family back home stopped spending holidays together a long time ago.  I remembered back to Christmases past, when holidays were celebrated with grandmas and grandpas and aunts and uncles and cousins.  I loved spending time with these people with whom I never got to see frequently enough.  But as time goes on, you know how it goes, grandmas and grandpas all move to a place called Hemet, which is hell on earth, but for some reason the elderly think of it as paradise on earth.  When my grandma and grandpa moved, sure we still had some family functions, but they were far and few between.  Soon it became too far to drive for get-togethers.  And then one day, it was the last holiday we spent together in Hemet.  I wish I could remember this one last hoopla we had as a family.  I would have probably been crying the whole time, mourning the loss of family functions, so it is probably better that I didn’t know.  When I cry hard my eyes get really puffy, I get a migraine, and then I throw up.
Unlike my family who had parted ways to start their own traditions, this family still celebrated together, quite often.  What if we could be a part of it? I thought in my head, deeply wishing this could be so.  Every Christmas Eve Jeff dresses up as Santa Claus and walks on the roof shaking bells and peeking in the window.  Then he comes into the house while hollering popular Santa sayings and bearing gifts he brought from the North Pole.  This sounds so wonderful, but to tell you the truth, my children are afraid of Santa.  "Is this one the real one, Mom?  Is this Saint Nick?" they ask every time they see one.

And then they ask me, "So, this guy is a stranger dressed like Saint Nick, Mom?"

"Yes.  Now go sit on his lap," and then I push them toward him, and suddenly my children scatter, and I can't catch them.  Santa pictures never go so well.  You would have to admit, some Santas are scary. 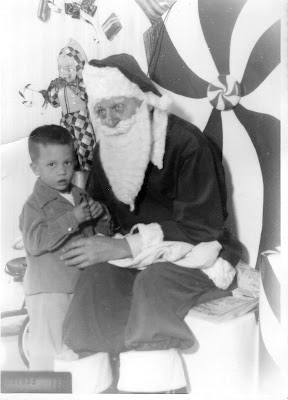 My kids are also scared of clowns and the Easter bunny.  With good reason.

Source
Within me I felt inner turmoil.  I knew I shouldn’t have agreed to come.  I was tempted by this place, by Santa and family traditions, and I was irritated and confused because of it.
Maybe if it is Santa I wanted so bad, I should have my husband dress up each year, and then after midnight it could get even more interesting.  It would save a lot of hardship of moving so very far away.  But I knew this really wasn’t about Santa.  This was about simplifying our lives so that we would have time for the things that are important to us.
Would moving to this hill make us one step closer to living according to our values?
Hmmm…
Posted by Simple Life Journey at 10:51 PM