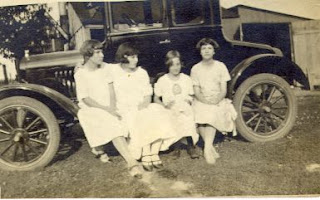 This is not an actual picture of us.  These people are probably very old by now.
It was the time in life where adolescence meets adulthood.

There was just one hitch.
All three of my best friends married three brothers.
A family was formed.  My three “sisters” became real sisters.

Without me.
It wasn’t a big deal at first.  It was exciting.  This sisterhood would be guaranteed to exist for a life time.  What could be more special?
A weekly family dinner, birthday celebrations, an annual Christmas slumber party, “Auntie,” “Uncle”- titles with adoring meaning.  Familiarity and bonds that only a family could share.
I watched from the beginning.  The bonds evolved before my eyes.  Unknowingly and accidentally, I drifted further and further from this surrogate family that I once felt a part of.  I did not attempt to replace it with other friends and people.  I had no desire to.  Could anything compare to the bonds I shared in these friendships?
The distance felt like a hole in my heart, a hole that kept growing.  Loneliness became the norm.  I felt pain.  A lot of it.  And soon the emotional pain grew; I could hide it no longer.
I broke.
No one to be faulted.  I had tried my best to fight it.  I looked for the manual “How to Be Best Friends with Your Three Friends Who Became Sisters,” but to no avail.  Maybe I will write it someday for all of those in my same situation.  Do I expect someone to understand what it felt like?  Probably not, I mean, how common of an occurrence is it when someone's best friends all marry brothers and become sisters?  I can hardly go back in my mind, for a tinge of pain surges through my mind when I go there.  I questioned whether or not to reveal this part of my story, but I feel it is important to explain where I have come from to understand where life may be taking me.

I want to be sure and state that it was of no one’s intentional doing.  My friends could not feel the distance coming as I could.  They couldn’t see it or understand what I was going through.  No one understood what was happening.  It was life taking its course, like a rapid river suddenly moving in another direction.  I tried with all of my might to row against it, to fight the swift current.  These relationships were changing and no one knew how to alter course.  It was unintentional, but it was unstoppable.
Fate had decided.

By moving to the beach house I had moved only a few miles away, but inside it felt like one thousand.
These sisters were my anchors.  I was drifting.
Posted by Simple Life Journey at 3:40 PM