We had a plan.  We were just not sure it was a good one.  The plan?  1. Sell our house 2. Move into dream neighborhood.  That was it.  That was the plan.  No need for a Plan B.
Just didn’t realize dream neighborhood was so out of reach.
We almost signed our lives away for a house that we couldn’t afford, a house that could have swallowed us whole.  Aren’t many marriages destroyed over financial pressures?  It is another example to me that God knows best.  His answer “No” to my prayers was a good thing.  The house ended up selling for $5,000 less than what we put an offer in for.  Ironic?
For fear that we could make a rash, permanent decision (like we almost had), we decided to rent a house to give us time to collect ourselves, our thoughts, and our plans. We would take one year and research where to move our family permanently.
As we were packing our house up, my dad’s friend called him and asked him if he knew of anyone who would like to rent a house on the beach, a house in the same neighborhood as Cameron Diaz!!!  We jumped on it.  When else would we get this opportunity to live on the beach?  We will live here, sign the lease for a year, and by the end of a year, we would move to where we would raise our children for the next 20 years.  Should be easy enough to figure out by the end of a year.  A year is a really long time, right?
We would ride the market in hopes that the housing market would drop significantly enough so that we could afford to buy a house in my dream neighborhood.  “What if prices don’t come down enough?” I asked my husband in a concerned tone.  “I don’t know, Janna,” he answered back.  What do you mean you don’t know?  I didn’t feel safe and secure with that answer.  We sold our house without a backup plan?!!!

I wanted to scream.

The only consolation to me was that we would be living right by Cameron Diaz.  Yes, that was what consoled me.  We didn’t know where were moving, what we were doing, and for how long we would be in this state of limbo, but we would live near Cameron Diaz, so everything would be fine.
Maybe next time we make a huge life-altering decision, we should have a backup plan.  Whoops.
At least I would have a new friend. 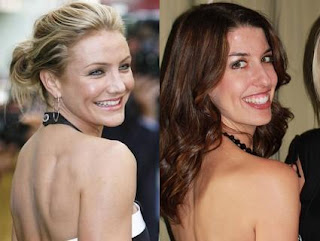 photo: www.starpulse.com
Posted by Simple Life Journey at 9:03 AM