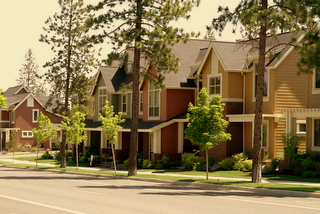 Our eyes were peeled, looking for a place to live in our dream neighborhood.  We were constantly checking on the market to see if anything popped up that we could afford.  When I say anything, I mean anything.  We were so desperate to be in this certain area that we would even have considered a one bedroom apartment fixer.  People in other parts of the world do it all the time.  A five person family living in one room.  Could it be such a bad idea?
While in this state of limbo, we took a trip to my husband’s sister’s house for the first time.  They moved out of L.A. to a small city called Temecula.  I remember them packing up to move.  I wondered to myself, “How can they move away from their family?  How can they leave all that is familiar to them?”  It is only an hour and a half away, but even moving an hour and a half away can change your relationships, your routines, your life.  As we were driving out there, I carried skepticism.  What could possibly draw them away from family?
We entered the freeway on-ramp.  Brake lights signified we were entering a parking lot rather than a highway.  I hate traffic.  Additional minutes were being added to this hour and a half drive.   Ugh.  I was looking forward to getting out of our overcrowded city.
Two hours later we were no longer in the city.  Green rolling hills lined each side of the freeway.  I love rolling hills.  If I could live on one I would. 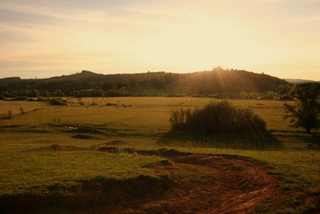 We entered the small city.  Cute.  Quaint.  I was surprised.  Still not a good enough reason to move away from family.  I stood my ground.
We drove through the old town strip.  The buildings were old, marked with evidence suggesting a town’s past.  I loved to see details of history before me.  A local farmer’s market was the cause of a mild hustle and bustle of people.  Nothing compared to the busyness of the large city we live in.  The “small town feel” evoked a certain charm that began to captivate me.  I began to see my sister-in-law’s attraction to this place.  Still not a good enough reason to move.  Period.
As we entered into a housing track, we passed by the most adorable playgrounds deep within the neighborhood.  Kids were swinging, running, and riding their bikes throughout.  A family walked by wearing swimsuits and carrying towels.  I wondered where their final wet destination was.
We drove up to my sister-in-law's house which was located in a cul-de-sac.  There were boys at the end of the street playing basketball.  Oh, my gosh, could this be just like my ‘dream’ neighborhood that I grew up in?
We opened our car doors to get out, and the neighborhood came to a standstill.  We could feel all eyes following our every move.  I glanced up at the man across the street who was interrupted from cutting out a big stump from his front yard as his wife and son sat on the lawn watching.  A big smile brushed over his face.  He waved and called out, “Hello.”  We waved back.  It was weird that he was so friendly.  We aren’t used to making eye contact with strangers.  Stranger=Danger, so the saying goes.
After family greetings, hugs and kisses exchanged, we were taken on a short walk to the local neighborhood pool.  Come to find out, each neighborhood had their own pool!
I lathered each child with all natural sunscreen made from green tea, my children and any other child within arm’s reach.  My husband swam and splashed with the kids in the water.  I watched on, sitting in the warm rays of the sun.  It was one of those moments when you feel like you are smiling on the inside.  Mmmm, can life be so perfect?  Could it be this place?  This endearing city? 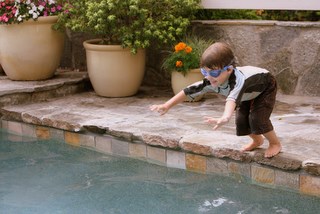 As we walked back to the house, we passed a home for sale.  My husband pulled out a flier and gasped.  “Let me see,” I said, anxious to find the source of his heavy inhalation.   I looked down at the flier, and then I also let out a gasp.  Our eyes met, “That’s it!” we said at the same time.
Neighborhood pools, schools that you could walk to, open land, options of acreage, a local library within walking distance.  This was better than my ‘dream’ neighborhood.  Suddenly I began to understand why my sister-in-law decided to move her family here.  Maybe it had so much to offer that the opportunity could not be passed up.
As we drove away from our short trip, filled with things to ponder, we both left with the same question in our minds:
If this place exists, then what else is out there?
Posted by Simple Life Journey at 8:04 AM